3 Great Reasons to Set Up Your Own Board. 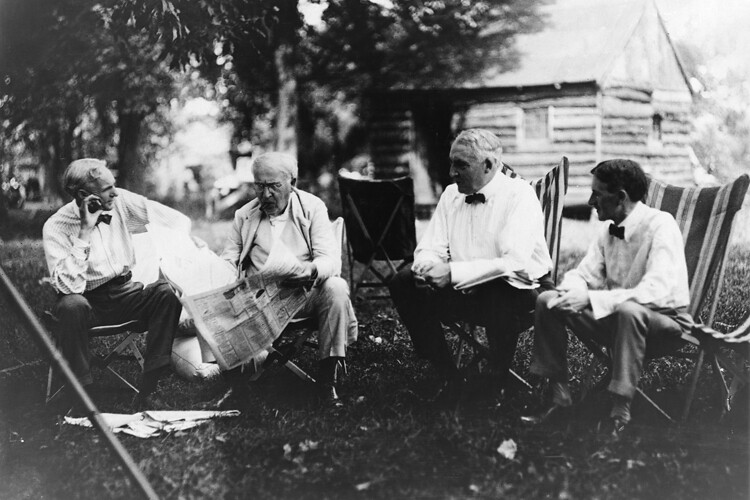 Back in a rural part of Florida in 1920, a farmer was out inspecting his stock in a Model T when he came upon five men stuck in a car in the mud. After successfully towing them out of the muck one of the men enthusiastically shook the farmers hand and proudly proclaimed ‘I made that car you’re driving.’

‘And I’m the man who made the tyres’ said another of the group. And pointing at two other members of the party he added. ‘Meet the man who invented the light bulb, and the President of the United States.’

When the fifth man asked the farmer if he recognised who he was the farmer candidly replied. ‘No, but if you’re the same kind of liar as those other darn fools, I wouldn’t be surprised if you said you was Santa Claus.’

In a world before Facebook or Instagram the farmer could be forgiven for not recognising the marooned galacticos. He had inadvertently stumbled across one of the most powerful Boards or masterminds on the planet. They included Henry Ford, Harvey Firestone, Warren G. Harding (President of US), Thomas Edison and Luther Burbank, one of the foremost botanists of his time.

For years, the group had a formal mastermind called ‘The Vagabonds’ and would take off each Summer on camping trips where they would discuss business, philosophy, political and science.

Moral of the Story.

Your ability to connect with a dynamic mastermind group will contribute more to your business and life than almost any other intervention. Having interviewed the most successful innovators of his generation, Napoleon Hill concluded that a mastermind group was ‘the very foundation stone of all outstanding personal achievement.’

There are three key benefits of having your own Board.

Our brains are similar to batteries. It is a scientific fact that a group of electric batteries will generate more energy than a single battery. The same is true of our brains. Hill nailed it by saying that ‘No two minds ever come together without, thereby, creating a third invisible, intangible force which may be likened to a third mind.’

This ‘third mind’ has been variously referred to as intuition, universal intelligence, the super-conscious mind or God. Call it what you will, suffice it to say that it exists and is as real as the nose on your face, and it abounds prolifically in the haven of a well managed mastermind.

When harnessed correctly this power…..

It just happens. There is a dynamic in a group that is exponentially more powerful than working solo or in isolation. All the great artists, composers and entrepreneurs understand the almost supernatural power of a mastermind.

In Conamara there’s an expression that says ‘aithníonn ciaróg ciaróg eile’ which literally translated means ‘one beetle recognises another beetle’ or ‘birds of a feather flock together.’

The same applies in life. You have a choice. You choose your tribe or mastermind and they will determine the pace at which you progress in business and life. The late David McClelland of Harvard said your choice of ‘reference group’ was more important in determining your success than any other single factor.’

Leverage is tantamount to speed in business. If you want to grow your business by 10% yearly you can achieve this absolutely by hard work alone. But if you choose to double, triple or quadruple your business performance and results you will need to apply the principle of leverage to your business efforts.

Leverage is the principle of achieving a lot with a little. It’s the very same force that enables a small kid to lift a car many times their weight using a lever called a jack. The most accessible forms of leverage in business are all accessed through ‘Other People.’

There are six important forms of business leverage.

Every one of these sources of business leverage is abundantly present in a dynamic Board or mastermind.

One of the most successful masterminds in the world has accountability at its very core. Have you ever considered how Weight Watchers are so successful in helping people lose weight?

They bring people with like goals together in a group. (Motivation). They provide them with information on the components of weight loss. (Education). They agree weight-loss goals with them. (Goal setting). They weigh them weekly and give them appropriate feedback. (Accountability). Then they help them establish healthy and enjoyable eating routines so that healthy eating becomes a habit and is not a function of discipline or will power.

The key to effortless discipline is routine.

John C Maxwell summarised it well when he said. ‘You will never change your life until you change something you do daily. The secret of your success is found in your daily routines.’

The prolific writer Somerset Maugham was once asked if he only wrote when he was inspired. ‘I only ever write when I am inspired’ he retorted. ‘Fortunately that’s at 9am sharp every morning.’ That’s routine.

The most successful change organisations in existence understand the power of changing routines in order to change results that at one point seemed almost impossible. Take Alcoholics Anonymous for example. They can conservatively boast of helping at least 10 million people achieve sobriety.

They do it not by addressing the psychiatric or biochemical issues of their members but rather through helping them change their routines around drinking.

Weight Watchers do it for food. By creating a few simple routines of measurement they can dramatically impact a persons weight.

The Rule of Benedict is almost 1500 years old and yet continues to enable contemplative monks to run businesses of great profitability and wealth by working only four hours a day. The Rule is essentially a series of routines incorporating a balance of prayer, work, rest, study, chanting, education and learning.

How to Run a Successful Board or Mastermind?

In Ben Franklins autobiography, although almost 300 years old, there is invaluable advice on how to set up a Board or mastermind and how to run it effectively.

‘….. I formed most of my ingenious acquaintances into a club of mutual improvement, which we called the Junto. We met on Friday evenings. The rules that I drew up required that every member, in his turn, should produce ….. points on morals, politics, or natural philosophy, to be discussed by the company; and once in three months produce and read an essay of his own writing, on any subject he pleased.

‘Our debates were to be under the direction of a president, and to be conducted in the sincere spirit of inquiry after truth, without fondness for dispute, or desire of victory.’

For Franklin, keeping the Junto from developing into rancorous debate was of the utmost importance. To this end he employed a gentle Socratic method during discussions, drawing the opinions out of members with questions couched in curiosity as opposed to attack. The rules dictated that those who were contentious were charged small fines.

The Junto lasted for more than 30 years and was so popular that Franklin allowed members to form their own spin-off groups. Franklin himself used the Junto as the foundation for a much larger group-the American Philosophical Society.

Key takeaways from the Junto.

In summary, Jim Rohn said that ‘you are the average of the five people you are surrounded by most.’ The ultimate way for you to leverage your business results is through the power of a mastermind alliance. It will clarify where you want go; where you are now; and keep you accountable and motivated to achieve your goals. There is no better performance management system for entrepreneurs than a dynamic mastermind alliance.

If you are interested in joining a serious new mastermind Board for entrepreneurs I am beginning one called OurBoard in Galway, Letterkenny and Limerick next week. Limerick is full but Galway and Letterkenny halve limited availability.