Even a Binman Can Appreciate Art 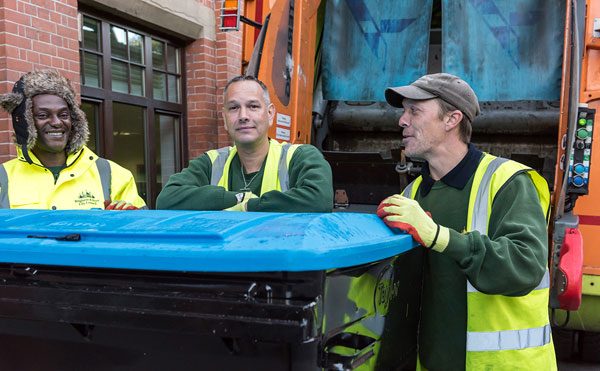 Reilly was as thick as thieves with Tom Kenny, the art curator, historian and joint-proprietor of the world famous Kenny’s Bookshop, Bindery and Art Gallery.

One beautiful Summers morning the two were driving in to open up the shop when Kenny’s was still down in High Street. They had the windows open and the sunroof down and they were in the finest spirits.

As they approached Lombard Street they fell in immediately behind a corporation bin truck. To their credit that Bin-man crew were working as smoothly as a Swiss clock. Such was there alacrity and agility that Reilly and Kenny barely had to even slow down. From right to left they grabbed those bins, hauled them back to the centre, dumped them and returned them back again clean as a whistle.

That all stopped suddenly and abruptly at the junction of High Street with Quay Street. In fact the entire heart of Galway stopped that morning with the exception of two things.

The first was the source of the stoppage. Strutting down the middle of High Street was a Goddess wearing little more than a short negligee.

The only other moving parts in Galway that morning were the three necks of the bin-men as they purveyed the vista unfolding before them. They went up and down, like those toy puppies they’d have on the backs of cars years ago. From right to left, those necks bobbled in symphony with the march of that girl down High Street and all the way down Quay Street. They looked after her as carefully and patiently as any mother hen ever watched her chicks.

Just for the divilment Tom shoved his head out the window and roared in that gravelly voice of his that everyone could hear.

‘My good men, we pay rates to the Corporation to have our bins collected and not to be held up in traffic jams on our way to work.’

Bruiser Barrett was the biggest of the trio and manning the central position. He pivoted slowly but elegantly – rather like one of those gorillas in a David Attenborough programme – and peered menacingly, first at Reilly, then at Kenny.

Reilly got the distinct whiff of sangfroid in the air. In fact he got the strong feeling that there might be a lot of spilled sang as a result of Kenny’s indiscretion.

‘Mr Kinny, I’ll have you know, that even a bin-man can appreciate art.’

Neither Picasso, nor Shakespeare in their prime could have captured it better.

‘Art washes away from the soul the dust of everyday life.’

‘Every child is an artist. The problem is to remain an artist when they grow up.’

What art did you appreciate today?