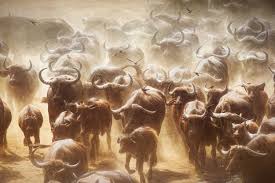 Each year he’d visit his brother in America and together they’d explore the vast plains and mountains of that massive nation.

And on his return he’d fill Reilly up with tales and stories of that great land.

This particular year they’d been to Colorado and he was explaining to Reilly that this is one of the few places in the world where cattle and buffalo roam together. He described to Reilly the similarities between these two animals and yet how one is much more intelligent than the other.

‘When a storm approaches, both animals can sense it in their being but are programmed to respond to it differently. The cattle, knowing that the prevailing winds come from the west instinctively head east, in order to outrun the storm. But as you know, cattle are slow and awkward and are rapidly overhauled by the speed of the storm. And instead of actually outrunning the storm, they simply end up running with it.

‘The buffalo on the other hand, wait until the storm is at it’s height, and then proceed to charge head on in to it. To be sure, it’s difficult and frightening to begin with, but very quickly they emerge the far side of the storm. They sensibly end up minimising their exposure to it.

‘And so it is with people. Many flee their problems hoping to avoid the pain and suffering involved in confronting them. In so doing they ironically maximise their exposure to misery and hardship.

‘Clever people however, realise that problems are part and parcel of life, and that the quicker and harder they charge at them, the quicker they are resolved and overcome.

‘Reilly, you may think a time will come when all is rosy and you’ll be problem free. The reality is that you’ll always have problems. And while this sounds negative, it doesn’t have to be. The day you realise that by charging head on at your greatest challenges, is the day you become free, because that’s the day you realise you have the solution to overcoming your cares and worries.

‘The impediment to action advances action. What stands in the way becomes the way.’

(If you’ve been procrastinating on eating important frogs such as clarifying your real purpose in business you could do worse than check out an online programme called The Smacht Edge that Padraic Ó Maille is running in conjunction with Galway Executive Skillnet. It begins this Wednesday and it certainly will help you reflect; refocus; and recharge. Check it out now on www.galwayexexutiveskillnet.com)