Meitheal. The Discipline of Execution 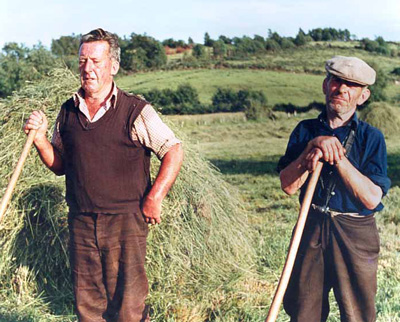 Reilly used often felt a tad sorry for Charles Mitchell as he solemnly delivered the evening weather forecast. Even as an innocent nine year old he was fully aware that it wasn’t Mitchells fault that the prevailing weather conditions of the west of Ireland more often than not portended wind and rain.

His country cousins were not impressed however and would proceed to berate and vilify him in the event of inclement prognostications.

This evening was particularly tense. For seven full days since the hay was cut it had rained the proverbial cats and dogs and the sodden crop was now ominously turning an unhealthy shade of green. Nobody dared make a sound as the morrows weather ultimatum was read.

‘A rapidly moving anticyclone will cross Ireland over the next twenty four hours. It will be accompanied by temperatures of 24 degrees Celsius in a moderate to fresh south westerly breeze. This will be proceeded by a system of low pressure bringing with it persistent and thundery downpours for most of the coming week.’

Reillys cousin, Paddy Coen, took what seemed like an eternity to reflect on the forecast. Dragging deeply on an un-tipped Sweet Afton, he exhaled profusely into the open turf fire before proclaiming with certainty and conviction.

‘We’ll have the Meitheal tomorrow. Take the bikes and do the rounds. Call on the Connellys, the Beattys, the Egans, the Corcorans, the Culkeens, the Burkes and the Reddingtons and tell them the Meitheal begins after 7 o clock breakfast tomorrow morning.

Reilly was summarily dispatched, being the youngest, to announce the news of the impending Meitheal.

‘There’s a Meitheal in Coens tomorrow morning at seven sharp.’

Being a city lad he had no idea what a Meitheal was but it sure was whipping up one hell of a reaction with the neighbours.

He awoke the following morning to an explosion of senses. The kitchen was bursting at the seams with representations from each of the neighbouring families. There was already a tangible and giddy exuberance building amongst the neighbours. Even Mr Conway, the County Solicitor who rented land from his cousins, had arrived to partake and was tucking into his breakfast with gusto.

And that breakfast was worth travelling and rising for. His cousin May, had remained up most of the night preparing oatmeal porridge drizzled in honeycomb honey and smothered in fresh cream. This was followed by thick slices of home cured hairy bacon that had been smoking over the fire for weeks and fried with freshly plucked mushrooms that he’d seen Mick Burke arrive with that morning dangling on rushes. And finally there was the toast. Reilly was detailed to suspend slices of homemade white bread on a long two pronged fork over the open fire until they browned and toasted. These were then liberally coated with salty homemade butter and Old Time Irish marmalade.

Reilly watched on fascinated as his shy, docile and retiring cousin Paddy metamorphosed before his eyes from back bencher to centre stage. But cometh the hour cometh the man, and this small man now stood at the top of the kitchen table, and like generations before him, he connected with his tribe. Placing a single leaf of blue Belvedere Bond notepaper beside him, he began.

‘Today, we will dry and save all the hay in the Race Park field.’ There were loud cheers and shouts whilst Paddy waited patiently for them to abate. (The ‘What.’ Clear Goal)

‘As the weather is due to change later tonight it’s an absolute must that we get the hay cut in the Race Park dried and under cocks by this evening. Failure to do so would result in us losing the entire crop and would leave us with no fodder for the winter.’ The message was greeted with the gravitas it merited, even by the smart asses in the group. (The ‘Why.’ Rationale.)

‘We’ll begin at 8am sharp and aim to have the first, and heaviest, turning done by noon. We’ll have a rest for a whileen and then get the second turning done by 4pm. The third and final turning should take us no more than two hours which means we should have the hay as dry as a bone by 7pm. We’ll then stack it in cocks, cover them with cáipeens and be ready to begin the party by 10 o clock.’ (Clear schedule of events.)

There was an animated response to Paddy’s latest plan. Some felt it was too optimistic. Others felt it could be done quicker or better or more easily. Paddy listened attentively to each suggestion and allowed each person time to articulate their opinions. It seemed to Reilly that the meeting was descending into chaos with the amount and diversity of opinions and ideas. (Always trust the group to come up with innovative solutions)

He thought Waterloo was well and truly lost when Mickeen Culkeen, who was only five years older than him, asked enthusiastically.

‘Why don’t we make a game out of the hay making?

There was pandemonium. Some of the elders accused him of being immature and not taking things seriously. Paddy moved swiftly to protect him however.

‘What’s behind your question Mick?’

Mick knew he was under the spotlight and that’s where he performed best. As Paddy called for silence Mick proceeded to unroll a large sheet of brown grease proof paper, greasy side down, on the kitchen table.

‘I’ve just counted the number of hay turners in the room and there’s 16 of us. Let’s divide the Big Field into 16 equal squares and have a race to see who finishes first.’

Paddy sketched out 16 squares in pencil on the brown paper. (The Scoreboard)

The focus now wasn’t on the plan. That was a fait complit that had already been totally bought into. It now was on who would get what square. (Commitment)

They couldn’t get out to the Big Field quick enough. The games had well and truly begun. (Commitment and Accountability.)

Reilly was surprised that Paddy elected not to turn hay that day even though he was acknowledged as a legendary man with a rake and a sure contender to win the competition.

And that’s what they did. They supported those 16 hay turners as if their lives depended on it. They must have covered a marathon of miles ferrying milky, sugary tea in lucozade bottles to every turner. Reilly observed Paddy checking in with each turner and giving them feedback on their performance. (Freed up the team to work on the main thing and prevent them being distracted by the whirlwind of day to day activities)

Peter Gleeson, Reillys cousin, who’d played football for Dublin in Wembley earlier that year, was fit as a fiddle and bolted into an early lead that morning. Gradually however, the slower but steadier rhythm of the Reddington brothers won out in the end and they finished marginally in front, just before 11.30 am. In the spirit of the Meitheal they now proceeded to help Mr. Conway, who despite having the fanciest of rakes and forks, was struggling with both the pace and the rising heat. (Measurement, Tracking, Keeping Score)

Slowly and perceptibly, the pallor and texture of the Big Field changed. By noon, the once turned hay stood fluffier and yellower than earlier. By mid afternoon, as the temperature continued to soar and the fresh wind provided the best of drying conditions the hay turned a straw white shade. By evening time the hay was ready for cocking and by 9 pm, the big field had been transformed from a carpet of sodden hay to an assortment of gaily capped hay cocks.

Reilly learned after that it had been a great party. He’d fallen asleep first, and not surprisingly awoke first the following morning.

It was like as if nothing had happened the day before. The kitchen was deserted but spotless and returned to its former order. He peeked out the window to confirm that they’d actually saved the hay. And they had. Although the rain was teeming down in buckets the freshly made cocks were dried and clothed and protected from the elements.

The only evidence that a Meitheal had occurred lay neatly on the tidy kitchen table. The brown grease proof paper was somewhat the worse for wear but finishing times and final positions, 1 – 16, had been completed. On it lay the single sheet of blue Belvedere Bond notepaper with Paddy’s handwritten notes for the Meitheal.

1. They are based on the simple notion that teams work and that the whole is greater than the sum of its parts.

2. The responsibility for the successful management of the Meitheal is always with one Ceannaire (Leader). The Ceannaire is not necessarily an extroverted or highly charismatic leader. Rather they see their role as that of ‘Facilitator.’ To facilitate derives from the Latin word ‘facile’ which means to ‘make easy.’

3. There is a six question process for Ceannairí that has been passed down from generation to generation that ensures a successful Meitheal. Kipling summarised it in six words in the middle of the twentieth century. They were the only notes Paddy had scrawled on the Belvedere Bond notepaper.

They taught me all I knew.

Their names are What and Why and When

Where and How and Who.’

4. There is one clear outcome and all activity is focused clearly on it and all other distractions are deflected away from it.

5. Everyone is crystal clear on what’s expected of them.

6. Everyone has the right materials to do the job. (Recall that breakfast)

7. There is a scorecard, created by the team, that is visible at all times that highlights where exactly the team are and where exactly each member of the team is and how they’re performing.

8. There is a culture of the strong helping the weak.

9. In the Celtic calendar, Meitheals were held seasonally or quarterly. The notion of a Quarterly Strategy Meitheal is one of the most powerful concepts in organisational change management. Make it a ritual. Motivation gets you going but rituals and habits keep you going.

10. Execution is the major job of the business leader.

Pádraic Ó Máille is an experienced group facilitator. He facilitates inspirational strategy Meitheals for the good and the great of Irish business. His focus is on helping you and your organisation execute. If you feel stuck in your business and are ambitious to move forward please give Pádraic a call on 0987-2647817 or contact him at p@omaille.ie