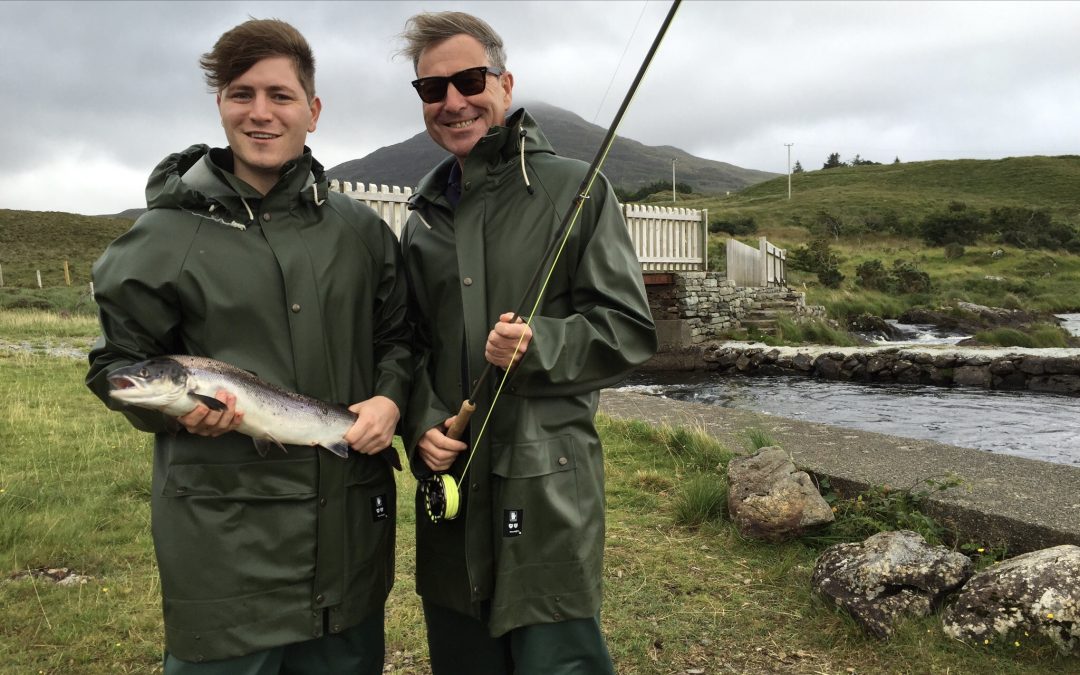 People used often wonder how Reilly could always commandeer tickets to Ireland’s soccer internationals during the halcyon days of Jack Charltons era. And they weren’t just ordinary tickets. More often than not he’d be in the main corporate box hobnobbing with the good and great of the soccer and government institutions.

The reality was that part of Jack Charltons remuneration package if he succeeded in getting Ireland to a very first World Cup finals was that he be provided with the best fishing ghillie on Lough Corrib for an entire week.

Reilly got the job hands down. Everyone knew he was the best dapper on the Corrib by a country mile.

Conditions were near perfect that first days fishing in early May. A fresh force four south-westerly wind imbued with what Reilly would describe as ‘a bit of nature in the air’ pervaded all week. The trout were taking in profusion and it wasn’t long before Reilly had six fine trout colouring the deck of the boat.

That contravened the first rule of ghillieing – never upstage the client. And it was this rule that most challenged Reilly in life. He was a born competitor; loved to win; and struggled to let others better him.

The issue was that this on particular day his client was equally as competitive as Reilly. And he was not enjoying the best of bonne chance. He was either striking too quickly or too slowly and his humeur was in rapid decline.

Reilly sensed the sangfroid and feared the worst.

‘We’re both using the exact same lure (two fresh mayfly); we’re sat in the exact same boat; we’ve each have had ten rises of a trout to our fly. You’ve struck on nine occasions landing six and I’ve failed on every single occasion to even strike a ruddy fish. So Reilly, it seems to me you know something I don’t know and if you don’t spill it to me you’ll be swimming home.’

Reilly knew his goose was cooked, and uttered a silent prayer for the repose of his Uncle Stiofáins soul who had shared the formula with him many years ago vowing him to ciuineas, which is Irish for omertà.

‘What’s my wife’s name got to do with ruddy fishing?’ hissed Jack narkily.

‘Jack, if you want to catch fish like me, you have to tell me your wife’s first name.’

‘That won’t do’ says Reilly. ‘It’s too short. Where does the name Pat come from?’

‘Patricia. She was christened Patricia when she was born. Now what’s this bloody well got to do with fishing?

‘Patricia won’t do either. It’s too long.

‘Flaming Nora’ said Jack ‘will you ever tell me what this malarkey is all about.

‘Nora. Now that’ll work perfect Jack as long as you don’t mind using that in the formula.’

‘Reilly what formula are you prattling on about. Tell me now or you’re going over the side.’

‘Jack, the Corrib trout are not the biggest in the world for nothing. They’re also the cutest and are highly sensitive. When they rise to an artificial fly they sense it immediately and spit it out. To catch a trout on an artificial fly you’ve got to strike like lightning. To catch a trout on a natural mayfly like you’re now fishing you’ve got to give the trout a biteen longer. And it’s ‘that biteen longer’ that my Uncle Stiofáin identified with pinpoint, forensic and laser-like accuracy.

‘Stiofáin was a great man for the ladies, and strictly in the pursuit of science he courted them prolifically. When a trout would rise to his fly he’d amorously declare ‘Oh my Darling (whatever the name of the girl he had in the boat at the time)’ and then strike (the fish).

‘Whilst the occasion was always convivial, and many times more than that, Stiofáin noticed that his fishing performance and results varied from girl to girl.

‘When he was with an Ann or a Beth or a Liz or even a Joy, the company was delectable but his fishing results were less than perfect.

‘Similarly when in the company of a Deborah or a Rebecca or a Valerie, they’d have a great time but the fishing would only be mediocre.

‘His favourite girls names to fish with were Annie, Chloe, Sarah. It was with girls like those that he forged his reputation as the best angler on the Corrib.’

Just then a large trout swirled around Jacks bait and took the fly. In the sweetest voice you ever heard, Jack crooned.

Reilly never had to ask for another match ticket.

Science and precision play important roles in business and life.

Acquire, learn and apply better formulae for business and life and experience what it’s like to fry some bigger fish.

‘Show me any person of ordinary ability who will earnestly tell his story to four or five people a day and I’ll show you a successful person.’

Taken from Frank Bettgers book ‘How I Raised Myself From Fai,Utd to Success.’