The 4 Disciplines of Execution. 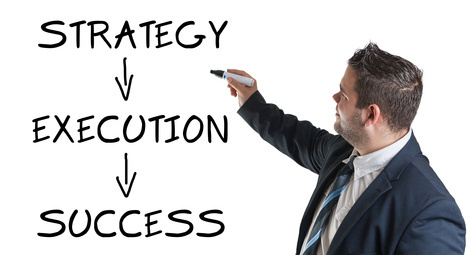 A Blog by Pádraic Ó Máille.

I don’t know how he evaded security in the Blackrock Clinic at 10.30 on that sultry September night but no better man! Taking a book from his briefcase he tossed it towards me on the bed.

‘Paddy, you have plenty of time on your hands. Denis has insisted we apply this stuff in the business immediately. It’s your kinda thing. Will you summarise it for me and show me how to apply it. I’ll be back on Friday.’

I’d have thrown it at him. That’s if I’d had the energy.

Seagull and I had soldiered together in boarding school. For the most part we got on swimmingly simply because we were so different. He was, in iMA parlance, a ‘high red’ – direct; utterly results orientated; happiest when in control. I on the other hand am a ‘high yellow’ – visionary; persuasive; an eternal optimist. And almost always seduced utterly by new things.

The fact that ‘Denis’ was Denis O’Brien piqued my interest.

So also did the title. ‘The 4 Disciplines of Execution.’ I’d based my business, SMÁCHT, on the notion that discipline is the bridge between aspiration and accomplishment.

Exhaustion succumbed to intrigue and I sat up and began reading. The first line grabbed me. Yellows are suckers for instant intimacy.

‘There are two principal things a leader can influence when it comes to producing results: your strategy (or plan) and your ability to execute that strategy.’

I knew full well from twenty five years in business that execution – the business of getting things done – is a leaders most important focus. Whilst most business degrees, and for that matter business gurus, focus on strategy, execution is where the rubber meets the road. As my cousin Ryan Carroll, who is Country Manager of Randstad Malaysia, is wont to say ‘Strategy is the easy bit Pádraic. Execution takes smarts.’

The Core Obstacles to Execution.

In their quest to understand the root causes of weak execution the authors surveyed almost three-hundred thousand leaders and team members and identified a number of root causes of poor execution.

The first was a lack of clarity regarding the goal. People simply didn’t understand the goal they were expected to execute. The bare stats revealed that only one employee in seven could name even one of their organisations most important goals. And the further from the top, the lower the clarity. And this was just the tip of the proverbial iceberg!

Lack of commitment to the goal was another issue. Even of those people who knew the goal only 51% were passionate about achieving it. That’s a massive 49% clocking in, disengaged, going through the motions.

Unsurprisingly, accountability was another issue. A staggering 81% claimed they were never held accountable to achieving their goals. A further 87% confessed they’d no clear idea what they should be doing to achieve their goal. They’d never have survived in Weight Watchers!

A more subtle finding was the difficulty in executing behavioral change. As a rule, any initiative you as a leader set out to achieve will fall into two categories: The first requires mainly a stroke of the pen; the second requires behavioral change. Stroke of the pen strategies are those you execute simply by authorising or ordering them to be done. Simply put, if you have the spondulix and the authority, you can make them happen. Examples include acquiring new property or recruiting new people or implementing a new marketing campaign.

Behavioral changes on the other hand are infinitely more subtle and demanding. They involve getting people to do things differently. As the writers remind us ‘whether you lead a small work team or a whole company, a family or a factory, no significant result is achievable unless people change their behavior. Yet, to be successful, you will need more than their compliance; you will need their commitment.’

‘Changing myself is hard enough,’ I hear you groan in exasperation! ‘How on earth can I get my entire workforce to smile at every customer who enters the shop?’

The real enemy of execution surprisingly turned out to be your day job! The writers call it the whirlwind. I’ve had clients refer to it as schtuf, a tsunami, an avalanche – even the devil. We all can relate to being sucked into a vortex of ‘schtuf’  clambering for our attention.

Leaders seldom distinguish between the whirlwind and strategic goals because both are crucial to the survival of the business. It’s that classic trade-off between urgency and importance that Stephen Covey so immortalised in his iconic book ‘The Seven Habits of Highly Effective People.’

The whirlwind is urgent and it acts on you and everyone working for you every minute of every day. Your goals are important but when urgency and importance clash there’s mostly only ever one winner. Once you become aware of this struggle, you will witness it play out in every team trying to execute something new. As the writers say ‘the whirlwind is a very worthy adversary undefeated in many organisations.’

In short, people were unclear as to what the goal was; lacked commitment to achieving it; didn’t know how to achieve it; weren’t been held accountable to achieving it; couldn’t get people to change; and were being suffocated by the whirlwind.

The 4 Disciplines of Execution.

In order to execute effectively the authors identified four disciplines that will greatly enhance your ability to master this priceless quality.

The authors state that focus is a natural principle. The suns rays when dissipated are insufficient to create fire but when focussed can burn through metal in seconds. The same obtains to human beings – when we’re laser focused we can achieve greatly.

Perversely however, the more you try to do, the less you actually accomplish. This discipline exhorts you to go counter to your basic wiring as a leader and focus on less so your team can achieve more. The scribes suggest identifying one goal (or at the most two) instead of trying to improve everything at once.

If you’re currently attempting to execute a half dozen goals your team will have challenges focusing. Perversely this lack of focus amplifies the intensity of the whirlwind, dilutes your efforts, and makes success difficult. This is accentuated if this happens at the top and several goals are allowed to cascade down resulting in total suffocation at the bottom.

This is the discipline of leverage and is based on the principle that not all actions have equal impact. The writers make a distinction between two types of measures influencing your WIG – lag measures and lead measures. Lag measures track and measure the result itself such as turnover, profit and customer satisfaction whereas lead measures track what what’s necessary to achieve the goal.

An personal example in point would be having a lag measure of losing a stone of weight in one month. The lead measures would be how often you exercise, what intensity you put in and what you eat. These measures are under your control. If you do them you’ll achieve the lag measure.

Acting on lead measures is one of the little-known secrets of execution. Once you identify your lead measures they become the key leverage points for you to achieve your goal.

People play differently when they’re keeping score. As my old colleague Dan Stamp, President of Priority Management, would say ‘Pádraic, you can be winning but feel like you’re losing if you don’t keep the score.’

4. Create a Cadence of Accountability.

Discipline 4 is based on the principle that unless we consistently hold each other accountable, our goals will disintegrate in the whirlwind. The cadence of accountability is a rhythm of regular and frequent meetings of any team that owns a WIG. These meetings happen weekly and last no longer than twenty to thirty minutes.

They gave a great example of an arrangement between a Dad and his daughter that she could use the car if she cleaned it each week. Everything went swimmingly for a few weeks until the Dad had to go out of town on business for two weeks. When he returned he discovered the car hadn’t been cleaned and asked his daughter why.

It took only a fortnight for the accountability system to break down.

The magic is in the cadence (rhythm, pulse, measure). Team members must be enabled to hold each other accountable regularly and rhythmically. Practically speaking this can be achieved by getting team members to answer a simple question. ‘What are the one or two important things I can do in the next week – outside of the whirlwind – that will have the biggest impact on the Scorecard?’

Stephen Covey (his son Sean is one of the three authors) always espoused practicing natural principles. Principles are timeless and they apply everywhere. They are natural laws, like gravity. It doesn’t matter whether you understand them or agree with them – they always apply. Jump of a large building and I assure you will hit the ground. Every time.

The four principles of execution therefore are focus, leverage, engagement and accountability. Are there other principles at play when it comes to execution? Absolutely. But in the view of the authors vast experience applying this methodology these are the most important. The challenge for leaders the world over is finding the way to implement them, particularly when the whirlwind is whipping up a storm.

And if you’re unsure how to navigate your current circumstances the late Jim Stuart, one of the co-authors of the book wisely quipped. ‘To achieve a goal you never achieved before, you must start doing things you have never done before.’

When Seagull returned on Friday I gave him this summary and we had a great chat about its findings. We both were agreed on one thing – that to progress as a person, a team or a business you need to create a discipline of execution. Make that your focus for the coming week.

Pádraic Ó Máille is the creator of SMÁCHT, a mindset and a methodology that helps leaders execute, even in the midst of a storm. He has a SMÁCHT group that meet in Clarenbridge every month and it’s highly motivational, practical and it will hold you accountable to your goals. If this article touches a chord and resonates with you give him a call on 087-2647817 or email him on p@omaille.ie or leave a comment below this article.