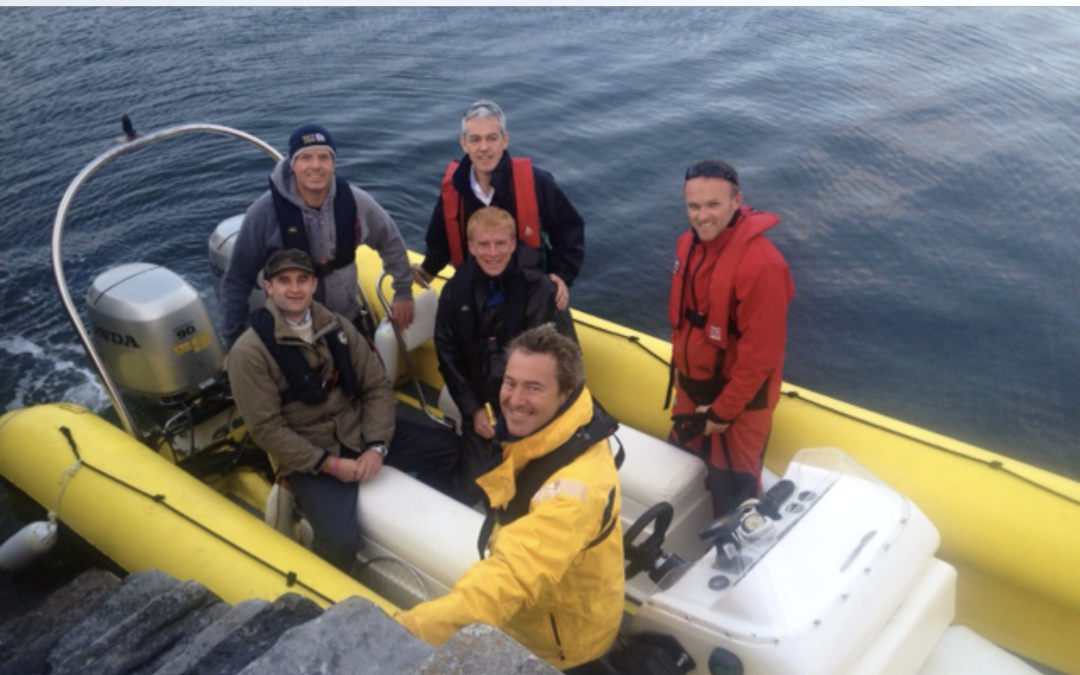 Neither Reilly nor his son would ever have bought the boat had they known what she was called.

The English indulge their boats and cars like no other nation and no bride on her wedding night was ever lavished with such reverence as the man selling the boat when extolling her every component.

He’d installed new timing belts in each of the two engines after one year even though the industry standard was happy with one in five. He’d applied three veneers of yellow protective paint coating to protect the rubber tubes from abrasion – ‘just to be sure’. When he lovingly insisted Reilly feel for himself the quality of ‘the two new nipples he’d fitted on the impellers to enable manual freshwater cleaning’ Reilly wondered was he slagging. He wasn’t.

Reillys teenage son Shane was less interested in mechanics and more concerned about performance. ‘Ask him how fast she goes, and how she handles big waves. And be sure and ask him what that stupid name means. I hate ponsey French names on boats.

When Reilly asked what the name meant Mr Smith was less than assured.

‘Can’t help you there mate. I bought her in Spain from a chap who said the name had something to do with her ability to perform in rough weather. As both my wife and I got sea sick the first time we  took her out, we never really used it much since.’

Reilly was tempted to remind him of Seneca when he said that ‘boats are safe enough in the harbour but that’s not what they were made for’ but thought better of it.

Her identity, and reputation, were quickly revealed on her maiden voyage to New Quay in North Clare where Reilly planned on mooring her. Little five year old Ivan Brophy, had just returned from a year in Spain where his mother Joanne had been teaching Spanish to the Spaniards. Upon seeing the boats name he erupted into laughter.

‘What’s so funny about it? Reilly enquired suspiciously.

Eyeing up the other boats in the harbour Ivan proceeded to rattle of their names.

‘All the other boats here are named after cissies. There’s the ‘Lady Mary’ and ‘The L.E. Orla’ and ‘The Dancing Queen’. Yours, on the other hand, is a real mans name.’

‘What does it mean? Reilly demanded impatiently.

And so she was. Over the years she’d taken just about everything the Atlantic had thrown at her. Wide at the stern, deep at the bow and propelled by two faithful Honda 90s she’d more than paid her fare.

Which was more than could be said for the way Reilly cared for her. All year he’d leave her moored in the turbulent waters of New Quay. He was always too busy to take her out and rest her up for the winter. In short, he simply hadn’t cared? And the wear and tear had inexorably begun to take their toll. The hull, perforated by the constant attrition of the rocky New Quay seabed, began leaking slowly.

Not enough to prevent him going to Inis Oirr however. All week windguru.com had been forecasting almost perfect calm conditions for Wednesday. As long as Pat Price’s delicate bilge pumps kept working Reilly’d be fine. And they did. And, as always when he set foot on Inis Oirr, his heart soared.

He legged it out past the white beach bounded by turquoise green water and paused for a sos at the wreck of the Plessey. From there he went off piste as far west as you can go on this continent and was back at the harbour in under 90 minutes.

Just as well too, as the transom of the heavily flooded boat was less than one inch above the water line. He began baling with purpose. As the engine shafts resurfaced he couldn’t help noticing what were the remnants of Mr.Smith’s pristine nipples. They were now rusted over and covered in green slime. He shuddered to think what that precise Englishman would have made of the condition of the boat had he seen her now.

Telepathically he heard a voice booming down at him from the harbour wall.

‘Bail ó Dhia ar an obair ach nach trua é an fallaí’. (God bless the work but what a pity about the neglect).

It was part blessing, and part admonishment. And because it had been administered by one Bartley Pól, it stung.

Reilly had first met Bartley more than 30 years ago, when as a wayward young student from university he’d tried to put some Smácht on him. Now in his late 80s, he’d not left this tiny island more than a dozen times, and only then to venture as far as one of the other Aran islands or to Galway. He still wore traditional breidín trousers held up with a multicoloured críos and topped with a báinín waistcoat.

The duo consulted, over pints of chilled porter in Tigh Ned’s. In Reillys experience nobody possessed the equivalent of the breadth and depth of Bartley’s wisdom.

‘Do you see that reef off Gregory’s sound? he asked him pointing to a vicious looking archipelago of rocks to the north of the island.

‘I was fishing lobsters there many years ago with one of my sons when we clipped a rock and holed the currach. My son began to bale furiously and managed to keep the boat afloat. The only thing was, we weren’t going anywhere. And these were days long before mobile phones or two way radios, or even life jackets for that matter. With darkness falling, and the weather deteriorating, what would you have done Reilly?

Bartley, like Socrates before him, understood the massive power of questions. And like Socrates himself, he sat back, and Reilly had no doubt would have waited all day if needs be for an answer.

Aware that currachs are made from stretched tarred canvas, Reilly knew that they could be plugged.

‘I’d have taken my shirt off, plugged the hole and rowed like the clappers to dry land. And after that I’d have got the best currach builder on the island to repair it as good as new’.

‘And that’s the secret to a happy life. Spend part of your time baling and part of your time rowing and another part of your time mending the leaks. Take care in particular to mend any leaks in your most important possessions such as your health, your relationships  and your home.  Faillí (neglect) is the greatest curse known to man and is the cause of most hardship in life. And speaking of leaks, its time you were heading back to the mainland’.

As Reilly powered the RIB back towards Black Head and on in by Gleninagh and Ballyvaughan Bay he was, as always after a session with Bartley, assailed by a BFO – a Blinding Flash of Obvious.

NEGLECT is the Big Yellow Bastard.

The motion of the waves and the wind in his face always induced a deep trance-like state of mind in Reilly. He became one with The Big Yellow Bastard. It seemed he was in conversation with some supernatural power. It was now saying to him.

‘Every second, of every minute, of every hour, of every day – a war rages deep within us.

‘Beckoning loudest, is the call to create. To be more. To do more. To have more. To start a business. To raise a great family. To create an amazing lifestyle.

‘Your deepest instinct is to pursue that calling with all your resolve. To revel in the learning of setbacks. To exalt in the triumph of success. To bask in the fulfilment of helping others.

‘Yet that big yellow bastard stalks you every step of the way.

‘For the most part you’re blissfully unaware of his scheming presence. At other times you’ll be seduced utterly by his ineffable charm and instant gratification from all things appearing odious.

‘Do not be deluded by his innocent and demure aura. It’s invidious at best and toxic in the extreme at worst.

‘How do I recognise him? Reilly asked.

‘You’ll recognise him as the one who questions who the hell you think you are to dream big. Who tempts you lasciviously to put things off for another minute, hour, day – lifetime. Who starts out as an sniffle and then develops into a disease – the most vile disease in all humanity. A virulent scourge that defies the most potent of antibiotics.

‘He’s big, he’s yellow, he’s a bastard and when he grips you he’s harder to kick than crack cocaine.

‘Neglect’ derives from the Latin neglegere which literally means to make light of. Neglecting our calling is life’s greatest travesty.

‘It’s the reason we’ve rock stars who don’t rock and entrepreneurs who never start a business and sports people who never kick a ball.

‘But the Bono’s and Bill Gates and Brian O’Driscolls – were also all seduced by Neglect. They too heard the clarion call of mañana and mediocrity and missed opportunity. They managed to keep their trousers on however.

‘What they understood, is that doing is not the hard part. Getting started is. And the panacea to getting started is that great Irish mindset called Smácht. It means discipline. And it’s the perfect antidote to Faillí or Neglect.

Reillys first call when he arrived safely back to New Quay was to Frank Byrnes RIB Refurbishment Centre. It felt great.

‘For want of a nail the shoe was lost.

For want of a shoe the horse was lost.

For want of a horse the rider was lost.

For want of a rider the message was lost.

For want of a message the battle was lost.

For want of a battle the kingdom was lost.

And all for the want of a horseshoe nail.’

(Reilly heard John Major recite this at a lecture in NUIG many years ago and it’s timeliness impressed him greatly.)